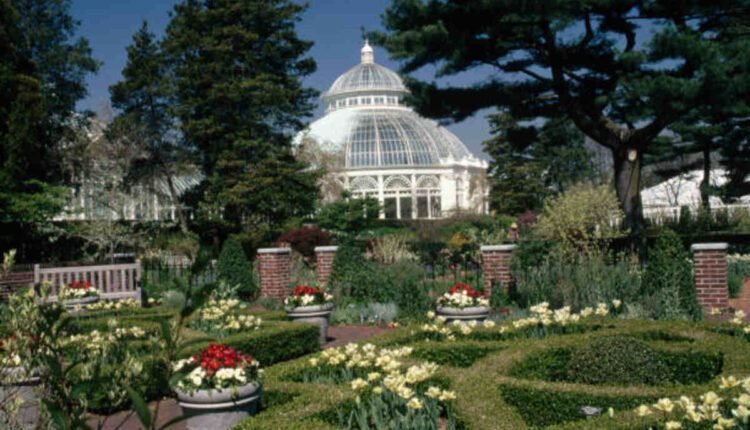 Located in Bronx Park, New York, the New York Botanical Garden is a 250-acre landscape with more than a million living plants. It was established in 1891 and offered a diverse variety of plants. The garden features plants native to North America and plants from around the world.

The New York Botanical Garden was established in 1891 by the New York State legislature and was designed by botanist Nathaniel Lord Britton of Columbia University. He purchased land from the Lorillard family, a tobacco dynasty. The Royal Botanical Garden influenced the design of the gardens in Kew, England.

The Garden is a living museum for plants and teaches about the world’s biodiversity. It is also a leading scientific institution, researching to protect plants. Currently, NYBG scientists are working on 250 international research collaborations with 168 institutions in 49 countries. Visitors have the opportunity to be a part of this incredible scientific process in real-time.

The New York Botanical Garden features 250 acres of landscaped gardens, wetlands, and ponds. It also contains the LuEsther T Mertz Library, America’s largest botanical library. It is easy to reach by subway from Grand Central Terminal in Midtown. It is best to plan a half-day visit to the Garden.

The New York Botanical Garden’s research programs focus on plant science. Its scientists have conducted over 2,000 field expeditions worldwide to collect plants. They also create a plant DNA library by obtaining genomic DNA from thousands of species. They also have a 300-kilowatt generator and a million specimens in storage.

There are many benefits to having a botanic garden in the city. Visitors can observe plants growing in the environment and learn about endangered species. Moreover, the botanical garden is a place to learn about horticulture, citizen science, and conservation biology.

The New York Botanical Garden is known for its beautiful floral display. A beautiful Fountain of Life sits in front of the Museum Building, which houses the Garden’s herbarium and library. The Fountain of Life was a key element of the Garden’s original plan, which was approved in 1897. A design competition was held in 1900, but Carl E. Tefft chose the final design.

If you love the great outdoors, you’ll want to visit the Enid A. Haupt Conservatory, a New York Botanical Garden greenhouse. It was designed in the Italian Renaissance style by the Lord & Burnham Co.

Since it was built in 1900, the Enid A. Haupt Conservatory has undergone several renovations and restorations. It has recently reopened after undergoing an $18 million restoration. It features eleven galleries featuring plants from around the world, including the famous Palms of the World gallery. The Conservatory was closed to the public for over a month due to a coronavirus pandemic. However, it will reopen on September 22 in a limited capacity.

The Conservatory is one of New York’s most important landmarks. More than 3,000 specimens grow inside of 10 pavilions. The conservatory covers four distinct climates. It is also listed on the National Register of Historic Places. The garden is a popular spot for children to visit. A variety of classes are offered on the Garden’s website. For more information, visit the Brooklyn Botanical Garden’s website.

If you’re interested in learning more about the plants in the Conservatory, there are special events that you can attend. There are also regular exhibitions and special shows. Some of these events are free. Some of them require reservations. It’s also important to consider the price before you go.

There are always some free activities. Among these is the annual model train exhibition. It features over 150 landmarks. Guests can also attend the Holiday Train Show. It will run through January 23, 2022. For more details, check out the Brooklyn Botanical Garden website.

The New York Botanical Garden is a landscape treasure encompassing 250 acres of Bronx Park. It was founded on the grounds of the Belmont Estate, a property owned by tobacco magnate Pierre Lorillard. Nathaniel Lord Britton led the fundraising campaign and was inspired by the Royal Botanic Gardens in London. Today, the Garden has over one million plants and exhibits. There are both indoor and outdoor gardens representing different climates. During springtime, you can see the beautiful flowering orchids.

Educational programs at the Everett Children’s Adventure Garden teach kids about plant science and the importance of pollination. They also explore the interdependence between plants and animals. The garden’s interactive exhibits allow children to understand the role of flowers in pollinating seeds. In addition, the garden includes a meadow and a pond, which are perfect places for kids to explore.

As the Everett Children’s Adventure Garden director, you’ll oversee all aspects of the garden. You’ll oversee the exhibits and supervise staff who teach the kids’ programs. You’ll also be responsible for the planning and development of new programs. The director will communicate with other departments and represent the Garden at regional and national education conferences.

The New York Botanical Garden is a major educational institution for children and adults. Its mission is to inspire an interest in plant science, ecology, and healthful eating, and it is home to the world’s largest plant research program. It first opened in 1891 and has been designated as a National Historic Landmark. Several buildings have also been designated official New York City landmarks.

A pre-Columbian artifact that reveals a turtle’s life in a Bronx botanical garden may be one of the city’s oldest intact works of art. Created by the Muncie-speaking Delaware Indians, the turtle carving is likely to represent the Turtle clan, a spring or hunting territory, or a trail marker. In Native American mythology, the Turtle played a key role, swimming in the sea of eternity and supporting the world from below.

The turtle petroglyph was found on a boulder in the early 1900s and is now on display at the New York Botanical Garden. According to the New York City Landmarks Preservation Commission, the carving was created by Delaware Indians between 400 and 1,000 years ago. It may have been used as a symbol of the creation myth. Archeologist Edward J. Lenik said the turtle petroglyph was probably created in a solitary place, carved by people living there.

Turtle Petroglyph is also a popular attraction for children. It’s the first of its kind in the United States. Visitors can visit the site by car, public bus, or Metro-North Railroad. The Garden is also easily accessible by foot. There’s ample parking on-site and a children’s playground.

How to Create a Cottage Garden